Enjoy jazz with a splash of spiritual inspiration by Rev. Shana Lynngood.

On Sunday, Sept. 29, from 7 to 8 pm, it’s the marriage of jazz and classical by the group Byrne, Roessignh, Smith and Graham — Mary Byryn, flute, Karel Roessingh, piano, Joey Smith, bass, and Damian Graham drums, as they reprise their previous performance of Claude Bowling’s Suite # 2 for Flute and Jazz Piano Trio.

This Suite is a “crossover” composition by the jazz pianist and composer Claude Bolling. The composition, originally written in 1973, is a suite of seven movements, written for a classical flute, and a jazz piano trio (piano, string bass, and drums). The Suite was recorded in 1975 by Bolling on piano with classical flautist Jean-Pierre Rampal 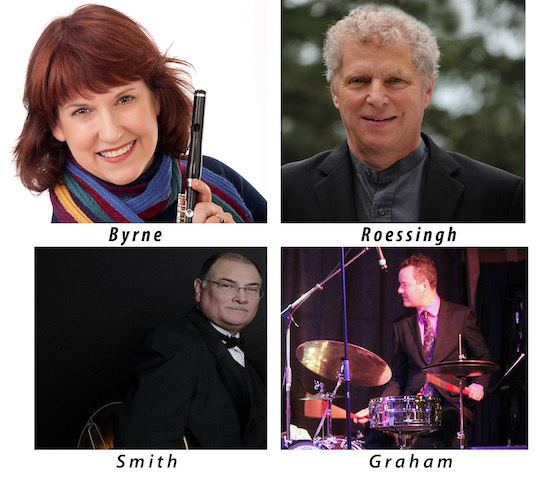 Karel Roessingh began his professional musical career in 1970 and in 1973 he studied jazz arranging and composition at the prestigious Berklee College of Music in Boston, Mass. He  completed a degree in secondary music and mathematics education at the University of Victoria in 1981. Karel loves to play the piano and plays in clubs, concert halls and in the studio whenever possible. He writes jazz tunes for his own and other groups, and has played with numerous jazz greats. He’s regularly asked to play at jazz festivals as both leader and sideman.

Mary Byrne — sought-after for her skills on stage, in the lesson studio, on the lecture podium, in the classroom, in print, and on tour — leads a vibrant and busy musical life sharing her abiding love of music with others. Mary is in her fourth decade on the flute faculty of the Victoria Conservatory of Music and its associate programs with Camosun College (CC), and is owner-operator of her own Piccolino Studio. In 1993 Mary completed the requirements for a PhD in Musicology at the University of Victoria.

Joey Smith touried for two and a half years with the Glenn Miller Orchestra as bassist and arranger before moving to Rochester, N.Y., to pursue graduate studies at the Eastman School of Music. For the past 18 years he has been bassist for many Victoria groups and has collaborated with various artists during their stops in Victoria.  Joey has written numerous arrangements for such groups as the Glenn Miller Orchestra and the Victoria Symphony, and has been a faculty member at the Victoria Conservatory of Music in the Jazz Studies Department since 2004.

Damian Graham has performed all across Canada, U.S.A. and Europe, has been busy changing the way people think about the drums. Born in New Zealand and raised on the west coast of Canada, Damian’s musical diversity has led to performances with some of the finest musicians in the country and abroad. Damian maintains a busy live and studio schedule with his own ensemble and as an in demand freelance musician. As well as playing drums, Damian regularly works in the chair of Producer, Engineer, Web and Graphic Designer, Composer and has run his own label Bagel Boy Records since 1989. Recording highlights include his latest release as a band leader entitled “Trios” a follow up to the well received album “Digs.”

Enjoy jazz with a splash of spiritual inspiration in venues with exquisite sound and setting. These hour-long evening services are a unique blend of jazz and spirituality. Each service brings together live music from popular local jazz musicians, a brief meaningful message, and a little of the history of the music performed.

Join us online at 10:15 a.m. for the Sunday worship service. Send an email after 9 a.m. Sunday to obtain the entry code. You can connect by phone or online.