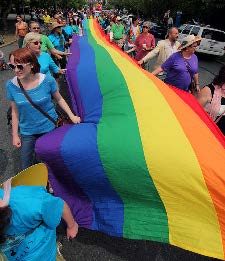 We march in the Gay Pride Parade each year.

1. Increasing the awareness of the congregation about gay/lesbian issues by keeping them informed

2. Encouraging both adult and children’s religious education programs to incorporate g/l/b/t/q life issues where appropriate, including the “Our Whole Lives” program.

3. Celebrating and affirming g/l/b//q issues and history during the church year, including Gay Pride Week in July and National Coming Out Day in October.

4. Participating in and/or supporting efforts to create justice, freedom and equality for g/l/b/t/q people in the larger society.

5. Establishing and maintaining contact with local g/l/b/t/q groups to offer support and promote dialogue and interaction.

We celebrate the presence of people of all ages, abilities, and economic levels. We are welcoming to people of all sexual orientations and gender expressions. We value and celebrate diversity. We endeavour to reflect the diversity of our society in our congregation, organizations and community. We strive to respect all people. We hope that all who visit, join, participate, or serve our congregation will extend the same respect to those they meet here. In honour of the above, we seek to promote diversity, respect, and the inclusion of all, in our congregation and in our community.

Join us at 10:30 a.m. for the Sunday worship service. You can connect by phone or online, or attend in person.